Mali: a crisis of inertia. Somebody has to start talking to the MNLA

Everywhere you look these days – Syria, the Eurozone, the world’s financial crisis, Mali – the world’s leaders are paralysed and blinded in their visions of possible solutions by old ways and old thinking. We seem to be in a world crisis of imagination.

While the media and the world focus on the horrors and lack of obvious solutions in Syria, events in Mali, bloodless and so no longer reported, are handing the world a big fat plate of an opportunity to help move forwards and possibly resolve some of the region’s big problems. And yet inertia may take  this opportunity from us.

In Syria no one knows which way to turn as every route involves massive casualties and with no obvious workable end-game plan in sight. Sectarianism threatens total chaos. Not so in Mali.

Commentators and journalists – most of whom are reporting second hand – give context to their reports by stating widespread puzzlement over the current cisis in Mali by claimig the country as having been a “beacon of democracy”. What they mean is that since 1990 the country has not had a military coup or civil war.

The root of the problem in Mali, as so often in Africa’s post colonial era, is not a problem of democracy or tribalism or of emerging “islamism” (whatever that means) or Al Qaeda terrorism or debt or aid or some inherent African attribute which makes them incapable of sustaining functioning democracies. The problem is the European concept of the nation state as imposed on Africa in the last century.

Mali has always been two distinct regions sharing a common trading artery – the river Niger. In their wisdom the European powers, or here more specifically France, decided to make one country of North Africa and Sub-Saharan Africa, the desert and the sahel, “white” and black. Mali has these divisons built into its fabric.

What is happening in Mali is the same problem, at root, in Zimbabwe, Somalia, Sudan, Niger, Chad, Algeria, Libya, Cote D’Ivoire. And sadly, it is the foreign  conception of “democracy”, which has very little relevance to the structure of states, communities and indeed life in Africa, that is actually causing many of the problems we see.

Someway, somehow, Africa has to find its own way of letting African states work out these imbalances in equilibrium. If  not they are going to continue to threaten the continent’s emerging prosperity.

The miracle of Mali, a miracle we see working today in their calm self-management of their existential crisis, lies in its people and their resilience and endurance and ability to have lived pretty peacefully together despite this big divide. What we see today is the country dividing along its natural axis because the roll of the die of history happens to have swung this way (in the West’s decision to topple Gadaffi without which non of this would have happened).

Both these solutions:
1) take account of today’s reality on the ground
2) go a long way towards resolving half a century of Tuareg rebellions
3) return the region to a more balanced and historically accurate set up than before with greater chances of long term peace.
4) remove an important safe haven for Al Qaeda (probably their  3rd most important zone of influence after Afganistan/Pakistan and the Arabian peninsular)
5) would help to drastically reduce the current humanitarian crisis in the sahel.
6) could be done with very few casualties.
All the international world has to do to begin the process of achieving this resolution is to recognise the human reality of the situation on the ground and talk with the MNLA.

Why isn’t this happening?
Because everyone is fixed on the European model of the nation state and the western model of neo-liberal democracy as imposed on Africa during colonialism, at independence and in the west’s corporate march towards globalisation.

When  we label the former (it will never be the same again) Mali state a ” beacon of democracy” in the region, what we mean is that it has been relatively peaceful (3 rebellions aside), neo-liberal economic policies have been allowed to be imposed by the IMF and the World Bank, foreign business has been allowed in to buy up the mineral wealth and th land value.

Mali’s democracy has also allowed Alegria’s AQIM to take shelter in its “troublesome” north, enabling ministers to claim help from the US and France for “counter terrorism” and their pockets. In turn the US and France have been allowed in to “monitor” the situation and train the hapless national army in “counter terrorism” (though of course no co-ordinated action was ever taken and  they forgot to teach the lesson about bullets in guns being an advantageous starting point with any enemy). Plus AQIM and the Malian and Algerian authorities were all happy because they could all use this “terrorism” threat to their democracies to hide the massive drugs/people/contraband smuggling (for some reason it is easiier to get drugs from South America into Europe by flying them or shipping from South America to West Africa and transporting across West Africa through Mali across the Sahara desert into Algeria and over the Med to Europe, than ship direct!).

The UN, the African Union and ECOWAS should be looking at the situation in Mali as it is today, not as it  was 6 months ago.  It was not a beacon of democracy more a functioning state, but for people like the Tuareg, as with the young and jobless throughout the country, it was not a state that they felt  they had any say in or which they felt they owned. Because of course they didn’t “own” it as they weren’t paying for it. Any government is owned by those who pay for it. We – the west – own African democracies more than African people because we pay for them through international aid.

All the people in Mali had been complaining about lack of real democracy, or perhaps  I should call it  effective democracy, for a while as it was not a democracy that promised the young a good education, a job, a future. Behind the democratic scenery, propping the whole thing up, was festering corruption which the “democracy” was institutionalising.

As it was six months ago was teetering on the brink of what we have today. These rebellions have been characteristic throughout Mali’s history as a nation. Any solution that looks to restore the status quo is no solution at all, it is just an attempt to restore the corrupt alliances that were in place before.

Mali has been through too much over the past 6 months to ever be able to return to what it was. To return to a unified Mali the MNLA would have to be beaten. Are we going to watch a foreign force enter Mali and participate in a civil war? Because that’s what it will take. The Malian army is too traumatised and demoralised by their whipping in the early days of the rebellion and the political situation in Mali is too uncertain for the military to be confident enough to take on the MNLA and AQIM/Ansar Dine. The only way they could attempt to “reunify” a reluctant north is with foreign troops, civil war and massive casualties.

What is so wrong with the MNLA?
Miraculously, remarkably, unheard of in the long and bloody history of African struggles, there have been very few casualties in the Mali crisis, and most have been military. Civilians are suffering displacement and uncertainty, but people are not killing each other in the streets, the government is not killing civilians, military are not running amok, rebels are resisting a jihadist state even though this might further their independence dream.

When you consider that since January Mali has had a rebellion, a military coup, a counter-coup attempt, a second coup (in the attack on the interim President) and half the country declare itself independent whilst struggling to keep an Al Qaeda invasion at bay, and there have been perhaps 2-300 people killed in total. That would be a good week in Syria!

And it’s not as though the MNLA have proved themselves irresponsible either. They are a rebel army who have taken over half a country without civilian casualties, rescued western kidnap victims from  their islamist foes, resisted teaming up with islamists even though this may help their cause  and are protecting their own people with responsibility and temperance and desperatly trying to keep out islamism from their homeland. They have become the popular choice and they are the only solution to the Al Qaeda issue. Shouldn’t we be on their side?

Their cause has been throughout the freedom of their people, and the rights-of their people to live without foreign influence, to live without Al Qaeda gangs and drug runners and people-traffickers forced upon them, to have their fair share of development support and to run their region in the way they want to. They want to breed their sheep, their camels, their goats. Their young want to go to school and get an education and then move onto a job, and they all want to party on down to their music, as they were doing only 3 years ago.

The international world, or it’s supposed representative bodies, in not even contemplating the northerners’ plight by talking to their representatives, is saying no you can’t have freedom to run your own affairs, your grievance does not exist, you must return to the situation as it was and return to your subjection.

Is this what the African nation state is about? Is this what western liberal democracy offers? Is this the Mali so valued and praised prior to the coup? Is this what international bodies like ECOWAS, The African Union and the UN are for?

Since writing this article I am glad to announce that the MNLA have now indeed met with ECOWAS. A good starting point, but why it has taken so long is puzzling. 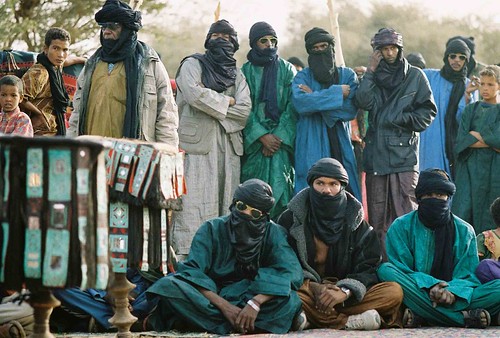